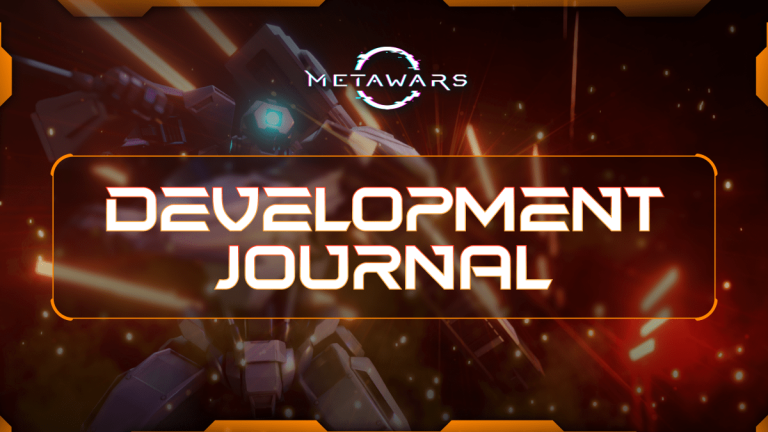 MetaWars is entering EVO 1, and we hope to welcome our MetaWarriors aboard the battlefield with a brief update on our development process.

MetaWars hatched in 2021 and our community has grown to over 180K. Throughout this journey, our goal is to build a trailblazing and stunning experience with you.

During the growth and development phase of our ecosystem, despite the challenges around us, there have been a lot of initiatives and progress made.

Behind the scenes, our team worked hard and made developmental progress on the game engine. We would like to share some highlights of the current production and our upcoming plans.

A lot of effort has been put into developing the foundation of MetaWars’ gameplay and making sure it meets the highest standards and user experience possible. In addition to Player Movement and Controller Improvements, we’ve also built a new Weapon Handle System that will allow players to move more freely and precisely control their weapons. Mech Movement States and Fine Tuning Movement Pace and Control will be the focus of future improvements.

Visuals always take us long time to build and that’s the key element for the game. We are currently developing a comprehensive and sustainable rendering strategy . Now that the rendering of in-game environments and shader development has been enhanced, Mech Customization and visual effects creation can begin. We believe that our community’s future gameplay experience will improve immensely with our anticipated Post Processing Effect adjustments and optimizations, as well as our asset management advancements.

MetaWars has undergone a significant animation makeover in the last month. Mech rigging are specifically time consuming, instead of using the standard human rig. Each Mech design have their own customised bone to present all sort of gameplay movements. Mech movement animations will be further refined, and IK and animation transitions will be updated in the near future.

Our feature development team is laser-focused on completing the project on time and on budget. Our ecosystem has just been enhanced by adding customisable color and texture patterns. Keep a watch out for our latest updates, which will feature attachments that may be added to various parts of the body, to demonstrate our commitment to appreciating your tireless efforts.

For this world to feel completely coherent and expansive, it requires an all-encompassing art and style. We are pleased to announce that we have conducted an extensive study on our community and the “market” and have begun to plan for the arts and world style. In the near future, mech designs will be made available.

We are in the process of forming partnerships with other guilds. More information about this will be shared soon! Subscribe to our various social media feeds so you don’t miss any news about the project’s progress.

MetaWars is rapidly progressing into our designated release schedule. Over the past few weeks, MetaWars has been demonstrating the mech movement animation and rendering design to our community. The team has been focusing on further optimizing the mech motion and VFX, user experience design improvement and game demo prototype building.

We are ecstatic to update our development progress, which covers:

In the MetaWars game, mech is the core character. While playing a TPS game, smooth motion control is one of the crucial elements to making a great gaming experience. The development team has put more effort into the motion graphic. Control smoothness and movement animation to create seamless mobility to the character.

Since the rendering of the environment and gameplay effect has been enhanced, we are now progressively developing the 3D model and in-game environment. Visual really takes us a long time to build, but we never doubt all the hard work and time we contributed to building the immersive in-game visual effects. The outcome is unexpectedly incredible, we believe this can accomplish our primary goal which is to provide gamers with a more engaging gaming experience and enhance the player’s immersion in the world, through 3D model design, shader, colour, and continuous communication.

We hope you enjoy our mecha model production showcase in our last update, but needless to say, we have been working hard on the functionality of mecha control and the overall user experience(UX). Currently, the team is focusing on the UX of the game, from entering to exiting the game we prioritize the user journey of gamers. Meanwhile, the user interface(UI) prototype is designed to meet the needs and art style of MetaWars.

Of course, as time went on, it became necessary to put together the game — a tutorial stage. We want it to be more than an introduction that our game designer has built a mini stage with a complete learning journey.

We have run through a long period of testing and adjusting the game data. MetaWars is a 3D FPS game, the frame rate and graphic performance are one of our major concern when it’s come to the user experience. Coming next step, we will be focusing on the performance optimization. Player will be allowed to play the game with the best graphic performance.

We are sincerely thrilled to share all these details with the community. The journey of building a Game from scratch takes enormous tears and sweat. We will continuously share news about our development with you all.

Explore and be part of us NOW!

Follow our socials and stay up to date with us! We look forward to seeing you in the MetaWars Metaverse.

Copyright © 2022 Metawars. All Rights Reserved.
Cookie Settings
We use cookies on our website to give you the most relevant experience by remembering your preferences and repeat visits. By clicking “Accept All”, you consent to the use of ALL the cookies. However, you may visit "Cookie Settings" to provide a controlled consent.
Accept All
Manage consent

This website uses cookies to improve your experience while you navigate through the website. Out of these, the cookies that are categorized as necessary are stored on your browser as they are essential for the working of basic functionalities of the website. We also use third-party cookies that help us analyze and understand how you use this website. These cookies will be stored in your browser only with your consent. You also have the option to opt-out of these cookies. But opting out of some of these cookies may affect your browsing experience.
Necessary Always Enabled
Necessary cookies are absolutely essential for the website to function properly. These cookies ensure basic functionalities and security features of the website, anonymously.
Functional
Functional cookies help to perform certain functionalities like sharing the content of the website on social media platforms, collect feedbacks, and other third-party features.
Performance
Performance cookies are used to understand and analyze the key performance indexes of the website which helps in delivering a better user experience for the visitors.
Analytics
Analytical cookies are used to understand how visitors interact with the website. These cookies help provide information on metrics the number of visitors, bounce rate, traffic source, etc.
Advertisement
Advertisement cookies are used to provide visitors with relevant ads and marketing campaigns. These cookies track visitors across websites and collect information to provide customized ads.
Others
Other uncategorized cookies are those that are being analyzed and have not been classified into a category as yet.
SAVE & ACCEPT